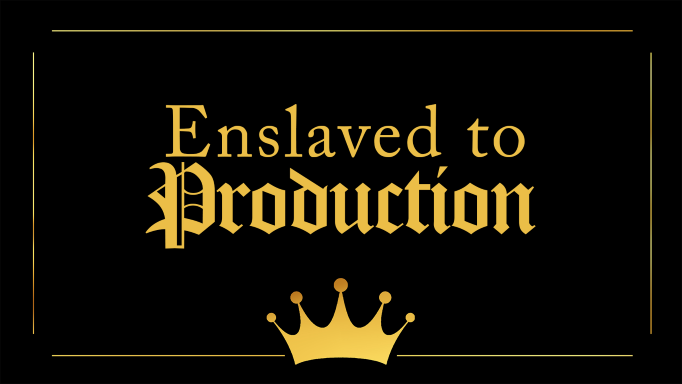 Let me tell you about being a highly driven person who also has ADHD. People who live with attention deficit challenges often struggle with an issue called hyperfixation. A specialist at Oxford talks about hyperfixation as “an intense state of concentration and focus…usually dedicated to things that the person finds enjoyable or fascinating.” This often comes with “almost inexhaustible energy” and “the ability to keep going and eventually succeed in the face of seemingly-impossible challenges.” Sounds pretty good, right? Well, it also includes focusing on something at the expense of “other responsibilities in their life” and even “forgetting to eat and sleep.”

I’ll lock in on a project and barely be able to think about anything else until I have reached a certain point of satisfaction with said project. From a bird’s-eye view, this has two major impacts on me. 1) It enables me to produce at a high level. 2) It seeks to enslave me to production.

This is my own personal story, but the truth is we live in a society enslaved to production.

After rescuing the Israelites from slavery in Egypt, God offers them 10 commandments to set them on a path of living in right relationship with their Creator and Rescuer.

For years, they’d been living in the constant anxiety of production. Under a series of dictatorial leaders, they’d been forced as cogs in Egypt’s socioeconomic structure to produce all of the wealth while the Pharaoh reaped all the benefits. Every day they would wake to a task list of production, all in the name of the one who demanded their loyalty and worship.

Now, post-rescue, God starts by reminding the Israelites where they’ve been. “I am the Lord your God, who rescued you from the land of Egypt, the place of your slavery.” (Exodus 20:2). Everything he’s about to tell them needs to be understood in the context of where they’ve been.

Walter Brueggemann, one of my favorite authors and theologians, lays out the ten commandments with this context in mind. The first three are vertical in nature, between us and God. Have no other God’s before me. No idols. Don’t misuse my name.

These sound pretty similar to what Pharaoh would have demanded. Exclusivity of loyalty and devotion. But of course, God followed these with something very unlike Pharaoh because the last six commandments are horizontal in nature, pertaining to our relationships with our neighbors. Honor your parents. No murder, adultery, theft, lies, or covetousness.

The last six can sound like production. They’re not just calls to abstain from negative practices, but to actively engage in the lives of our neighbors with integrity, kindness, and redemption. They’re calls to do. The Christian life is definitely one where actions and production are expected.

So, had the Israelites just traded one Pharaoh for another? God is saying, “Here’s how to worship me, and here’s what I expect of you.” That honestly sounds a lot like a typical Christian life today. Worship God. Serve others.

But we skipped one commandment. The one right in the middle of the vertical and horizontal. Number four. Exodus 20:8-11. A call to Sabbath rest.

With God, we are called in the middle of worship and production…to rest. And, interestingly, it’s the longest of the ten commandments. God spends more time here telling his people how to rest than anything else.

Brueggemann says, “God is not a workaholic. God is not a Pharaoh. God does not keep jacking up production schedules. To the contrary, God rests, confident, serene, at peace. God’s rest, moreover, bestows on creatureliness a restfulness that contradicts the ‘drivenness’ of the system of Pharaoh.” (Sabbath As Resistence)

I am definitely guilty of falling into the system of Pharaoh. Hyperfixation or not, I get locked into the rhythms and rigors of production. Worship. Produce. Worship. Produce. Give God his glory and get to work. But that’s not the whole story to which God calls us. Right in the middle of two, we are called to sabbath rest.

We can’t give God all the glory God is due unless we’re participating in sabbath. It’s not a suggestion. It’s a commandment.

If we are slaves to a society of production, always on, always driven to accomplish, always seeking to move up the ladder, always checking things off our list, we can’t be fully living the way God intended. If the Creator of the world can rest for a day, then so can you.

Taking his yoke upon you and learning from him (Matthew 11:28-30) is not only a call to go. It also includes a call to rest.

God is not Pharaoh, and you are not a slave to production. Take a rest. You will find you’re better equipped to live out commandments 1-3 and 5-10 if you are taking time for number 4.